Data is the most valuable commodity of our time. It is the lifeblood of today’s business and commerce and this will only become more true. Humans created around 60 zettabytes of data in 2020 alone. By 2025 that figure will shoot up to 175 zettabytes. Where is all this data being stored? Data centers. If data is the lifeblood, then data centers are the beating heart of the modern world. They are the internet’s engine rooms – storing, processing, sending, receiving and guarding access to the enormous amounts of data we generate and use.

It’s highly important for companies to protect their IT infrastructure and data, and to have them up and running at all times. More and more companies are meeting this challenge by relying on the services of specialized data center operators instead of operating their own infrastructure in-house. These companies demand that the highest security standards are followed to limit access to their operation-critical infrastructure.

Data centers are divided into multiple rooms and areas of varying security levels. Entry to these different areas is often restricted according to role, position and permission. The task of security experts working at these data centers is to create a complete security concept that allows all users to work together harmoniously with minimal bureaucratic processes and administrative overheads.

Regulated access for all user groups is not as straightforward as it may sound. There is a large gap between just getting it right, and excelling. It requires a lot of different technologies and processes to work in seamless synchrony. Customer cooperation and audit security are also essential – and all of this must be fast and simple.

We follow the highest data center security standards – and now we’re setting the standards of tomorrow. Together with our Technology Experience Lab partners FATH Mechatronics and peaq we have developed an innovative solution that will take data center security standards to unprecedented heights. The solution combines FATH Mechatronics TANlock with peaq’s access control system which stores and processes all access data in peaq’s distributed ledger technology (DLT), also known as a blockchain.

The TANlock is a specially designed IoT device for high-security physical access points such as data centers. It comes with technologies such as hand vein scanners, RFID readers and fingerprint scanners, allowing biometric and multifactor authentication. The principle of a hand vein scan is highly accepted among security experts. Also, intelligent sensors such as humidity, temperature and air pressure can be integrated with the TANlock.

peaq access control is a permission and access control system leveraging DLT to vastly improve cybersecurity and optimize access management processes. The system makes it possible for all access points, whether physical or digital, to be managed from one place and have all actions recorded on a decentralized, immutable database (blockchain). All transactions are merged into a permanent list of data records which is cryptographically secured.

Two weeks after we initiated the collaboration between FATH Mechatronics and peaq, the two companies met for a hands-on integration of the TANlock with peaq access control. It was complete and successful in under three hours. The solution was then integrated in our Technology Experience Lab in Frankfurt shortly afterwards. 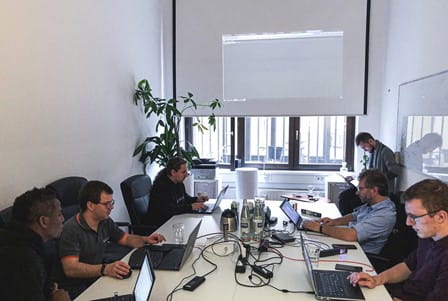 The solution enables server racks and users to be managed from one place with multi-factor authentication permanently recorded on the DLT. It can be used to grant or revoke access to any access point or device as needed with the click of a button – with immutable, verifiable records of every request, attempt, grant, and rejection of access.

The solution eliminates the threat of hidden access grants – significantly reducing the overall threat of being compromised. It adds an unprecedented layer of security to any access points it’s integrated with, while massively reducing administrative overheads and making auditing processes instantaneous.

FATH Mechatronics GmbH is an agile, fast growing company based in Spalt, near Nuremberg. The company's main focus is the development, production and marketing of innovative mechatronic products in the B2B sector. In 2018, FATH Mechatronics won the German Data Centre Award with the TANlock.

FATH Mechatronics is part of the FATH Group – an international corporate group with around 350 employees. The company specializes in the development and manufacturing of system components for mechanical engineering, industrial hardware and Lean 4.0. FATH maintains its own production, logistics and sales in Germany, the US, China, the UK and Brazil, among others. In selected countries, FATH also has an international network of distribution partners.

peaq is a Berlin based deep-tech company developing decentralized infrastructure for the Economy of Things. Their infrastructure is powered by their novel distributed ledger technology (DLT), the DAGchain – a high-performance DAG-blockchain hybrid DLT designed for the Economy of Things. It is built to exceed industry requirements for speed, scalability, predictability, decentralization and consistency.

peaq’s platforms empower companies to own, govern and maintain the infrastructure they use, solving fragmentation, trust, scaling and interoperability issues while enabling devices and machines to autonomously exchange, synchronize and trade data in real time. They save their clients precious resources while enabling new efficiency-enhancing business models and allowing their clients to monetize the value they create autonomously, instantly and on their terms.