Edge as a Service
4-minute read

Wake-up call: is the climate crisis this generation’s Y2K moment? The urgency to take action in the face of looming environmental disaster is reflected in the language we’re using to talk about what the UN describes as the defining crisis of our time.

Activists and the scientific community alike are forgoing the terms “global warming” and “climate change”, referring instead to what is clearly and undeniably a crisis.

Just this month, world leaders gathered in Egypt at the United Nations’ COP27 climate summit to discuss action to tackle the climate emergency. Experts predict that current policies may lead to a potentially disastrous global temperature rise of up to 2.8°C in this century.

The statistics are alarming and wide-ranging. We’re talking about a crisis that affects nations, organizations and individuals alike. In this way, it brings to mind a previous global challenge: is climate change our next Y2K moment, although far more complex and impactful?

The deadline for action is drawing closer

When it emerged in the late 1990s that many computers would fail on 1 January 2000 because they used a two-digit year indicator in their date formats, there was a clear deadline for action to be taken. For climate action, the line in the sand will be drawn 28 years from now: according to a recent Fortune survey, 58% of Fortune 500 companies aim to reduce their greenhouse-gas emissions and achieve their net-zero goals by 2050.

That line is likely to move closer as new climate laws and policies come into force. In business, clients and customers are increasingly drawn to organizations that have climate resiliency and net-zero plans, while investors flag climate change as a major risk. The Forbes survey also found that 40% of job-seekers consider a potential employer’s sustainability practices.

Net-zero is also going to be expensive to achieve: the world needs to spend an estimated USD 9.2 trillion per year to achieve our goals for 2050, according to McKinsey. By itself, it would be the third-largest economy in the world after the US and China.

Now is the time for fundamental change

In 1999, apart from those who wouldn’t believe Y2K was a problem (similar to today’s climate-change deniers), some organizations opted for a quick fix. They contracted a service provider to access their mainframe systems and change dates to a four-digit format.

A second group upgraded to a newer information technology system, such as SAP or Oracle PeopleSoft, but left their core processes unchanged. They gained some benefits, like modern user interfaces and best practices inherent to those systems.

A third group fully reengineered their business processes along with adopting new systems. This created lasting value because, instead of just fixing a single problem, they also reimagined and improved everything they did. 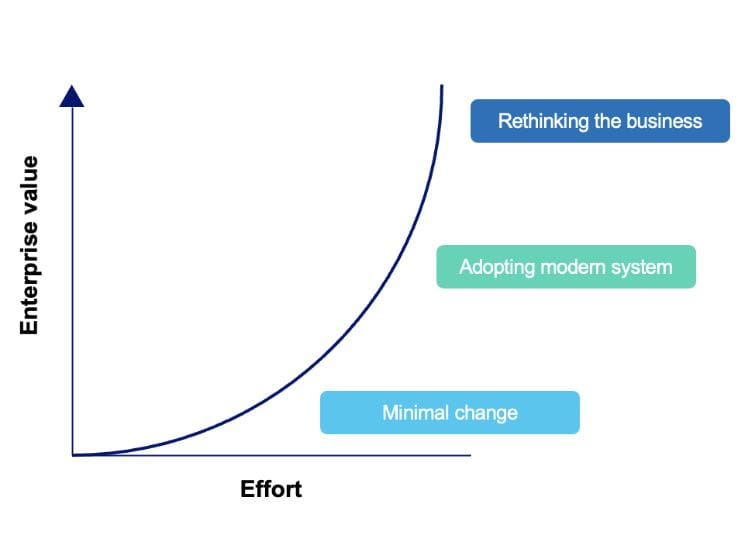 Similarly, amid the climate crisis, some organizations will take a narrow view: instead of consuming energy from coal power plants, they may switch to a renewable energy source, for example, or invest in more efficient machines. These actions are already impactful and will contribute to a decline in greenhouse-gas emissions.

A second group may go a step further by using new technologies such as automation or edge computing while keeping their underlying processes essentially unchanged. There are benefits to gain from this scenario too: along with reducing wastage, automation may also deliver cost savings.

Then there’s the third group: organizations that will make fundamental and continual changes to their technology and their business processes. They see the need for global action and acknowledge that the crisis will also affect their supply chain, their workforce and much more. So, they will overhaul their operations to make them agile and ready for change while reducing their carbon footprint.

During the COVID-19 pandemic, for example, some Chinese home-appliance manufacturers started producing personal protective equipment and deployed robots and other automation technology to hospitals. This reduced their operational risk and created new sources of revenue while the lockdown affected appliance production and sales.

Get on the sustainable path to 2050

An organization’s carbon footprint is often measured once a year and manually, which is about as useful as only checking your investment balance annually. There is a better way: your carbon footprint should be digitalized throughout your business and monitored as closely as your profit line.

So, how do you put your organization in that third group, agile enough to rise to the climate challenge?

Start by implementing modern technologies and practices. This allows you to become proactive in dealing with your climate-related challenges and respond at lightning speed while measuring the impact confidently.

At NTT, we have taken all this into account in the design of our recently launched Net-Zero Action solution – the first full-stack sustainability-as-a-service offering in the industry. It combines our expert consulting services with technologies such as IoT, private 5G, edge computing, digital twins, machine learning and more.

In addition to enabling faster, more proactive responses to climate incidents, it streamlines the monitoring, measurement and reporting of emissions and can be customized to an organization’s net-zero goals and the carbon footprint of its supply chain.

In this way, you can make informed decisions in real time without waiting for an annual report before you can act to save our planet.

Read more about our Net-Zero Action architecture and sustainability as a service.