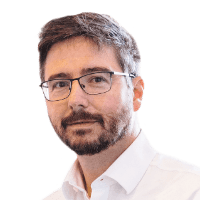 The world of esports is growing rapidly, providing athletes and fans with new experiences – experiences that simply aren’t possible in the real world. Zwift is a pioneer in the esports arena, creating a platform for athletes to compete against each other on an equal footing from their own homes.

At its heart, the Zwift platform is not just a game or a virtual world but, more importantly, a real-time IoT platform. It uses the data gathered from the distributed network of turbo-trainers to create a digital twin of each competitor inside the Zwift world.

Our partnership with Zwift leverages our continuous intelligence platform – originally developed for the Tour de France – to deliver real-time insights to fans and broadcasters. While the virtual world may seem to be far removed from the real world of business, this expertise is the same as we use to enable our global clients to turn IoT data into real-time insights that enable decisionmakers to drive their business objectives.

Turning a virtual world into a compelling fan experience means that the data has to be used in a different way, optimizing it for storytelling rather than the player’s experience.

The esports environment is different from other forms of cycling in that there are in-game mechanics, such as powerups, that create a level of strategy that’s unique to the Zwift platform. This is what differentiates esports from real-world competitions. Together with data like heart rate, power and cadence, we can explore a level of detail behind each performance that would be impossible elsewhere.

Starting with the Virtual Tour de France in 2020, we’ve partnered with Zwift to use the continuous intelligence platform as the engine for enabling broadcasters and fans to engage with the action. Since then this partnership has expanded to include the Zwift Racing League, the inaugural Zwift UCI Cycling Esports World Championships and we’ve just announced our partnership for the 2022 World Championships.

Together with Zwift, we’ve been exploring ways to better showcase the skills of competitors in this environment, including the creation of the Zwift Efficiency Index, which quantifies how well riders use their powerups to gain an advantage in a race.

Esports aligns with our vision of using technology to enable organizations across the world to achieve their business objectives, but it’s more than that. Cycling esports offers a level of equality that’s unmatched in almost any other sporting code. In the last World Championships, performance of men and women in terms of watts per kilogram were almost equal. Not only that, the ability of the athletes to compete from their own homes means that the Zwift environment is always safe, something that isn’t always true for public roads. We’re also seeing how athletes who have competed in Paralympic games are competing on an equal footing with able-bodied competitors.

This idea of equality is backed up by the prize money on offer. In road cycling, the prize money earned by men is significantly higher than that for women, whereas for the upcoming World Championships the prize money is equal across men’s and women’s events. Investment in the sport is critical as it enables athletes to focus on training and improving their performances. This aligns with our commitment, as NTT, to advancing equality.

When the world’s top virtual cyclists line-up for the second UCI Cycling Esports World Championships, we’ll be there to help Zwift bring the drama to life with data-driven storytelling.