Given the nature of fast paced businesses today, hyperscale data centers are set to dominate data center trends and design

We’re living in an era of instant consumption. From ordering food to booking cabs, almost every service is available in the form of an app. Given the extreme pace that most businesses operate at today, every organization wants their IT infrastructure to operate at a pace that their business demands. They need their IT infrastructure to scale quickly to match the pace of their business. This is extremely challenging in the digital era, where business dynamics change quickly – consider a big billion sale on an ecommerce website, where the demand on the ecommerce website outpaces the infrastructure they have in place.

A Forrester Research report highlights this aspect, in a study titled ‘IT Speed: The Crisis and the Savior of the Enterprise’. The report notes that while 36% of enterprise IT leaders highlight faster delivery of IT services as their top priority and a full 58% place it in the top three priorities, only 17% can deliver fast enough. Furthermore, only 12% can do so with high quality. Forrester says that demand has irreversibly exceeded the capacity of traditional IT.

A recent research report from Synergy Research Group shows that hyperscale operators accounted for 33% of all spending on data center hardware and software in the first three quarters of 2019, up from 26% in Q1-Q3 of 2017 and 15% in 2014. Over that same period the total market has increased in size by over 34%, with the vast majority of the growth being the result of increased spending by the hyperscale operators. This is significant when you consider that spending by enterprises and service providers has risen by just 6%.

As more IT spend is allocated to the cloud, expect the growth of hyperscale data centers to accelerate. For example, Gartner estimates that more than USD 1.3 trillion in IT spending will be directly or indirectly affected by the shift to cloud by 2022. As interest in public cloud shoots up, hyperscale players are also investing heavily in expanding their reach. A research report by Technavio states that over the last few years, hyperscalers have invested approximately USD 200 billion in capacity expansion and opening of new data centers.

In the future, we can expect current data centers to be replaced by hyperscale data centers as they offer tremendous benefits such as modularity (allowing enterprises to take a step-by-step approach to planning for their data center), redundancy (allowing enterprises to replace individual physical components rather than the traditional approach of replacing the entire server), reduced downtime and reduced energy costs. 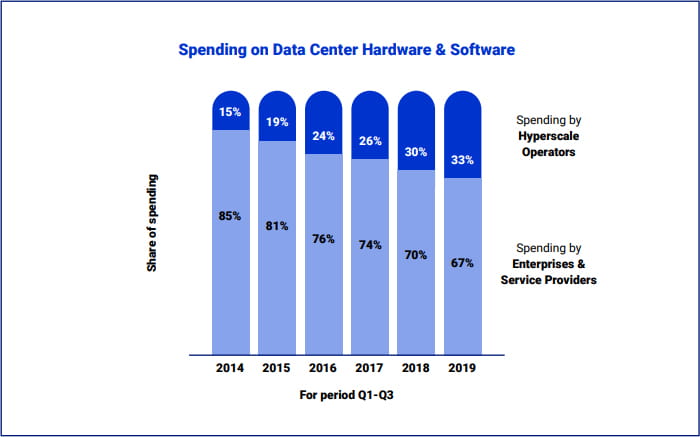